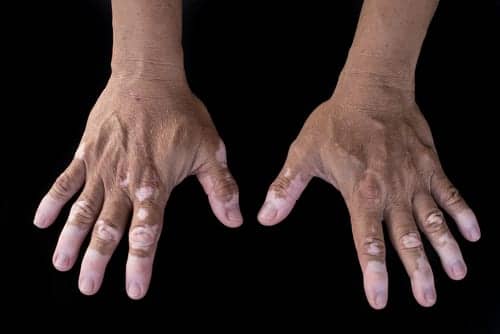 Combination therapy with the implantable drug afamelanotide and narrowband UV-B (NB-UV-B) phototherapy may help vitiligo patient achieve faster repigmentation than NB-UV-B alone. This response is even more pronounced among patients who have darker skin types, according to the study which appears  in the September 17, 2014 issue of JAMA Dermatology.

“The results of this study offer hope to patients with vitiligo in the treatment of this disfiguring disease,” conclude researchers led by Henry W. Lim, MD, a dermatologist of Henry Ford Hospital, Detroit. The study comprised 55 vitiligo patients, including 28 in the combination therapy group and 27 who received NB-UV-B monotherapy.

Individuals with darker skin responded more quickly to the combination treatment. “Because this group of patients has the most apparent visual appearance and hence psychological effects of the disease, rapidity of response for these patients would be most welcome.”

Clinuvel‘s proprietary first-in-class photoprotective drug Afamelanotide or SCENESSE® increases the levels of melanin in the skin and shields against UV radiation and sunlight. It is delivered via a subcutaneous dissolving implant approximately the size of a grain of rice. Increased pigmentation of the skin appears after 2 days and lasts up to 2 months.

How to Keep Your Hair Shiny, Voluminous, and Healthy For Life