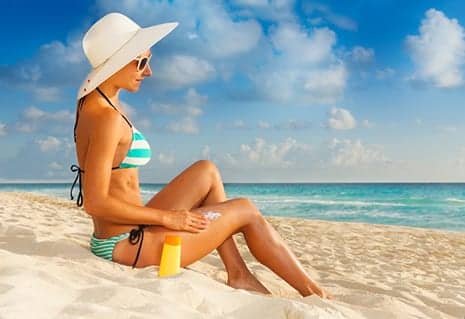 mySmartSkin, a web-based intervention targeting sun protection behaviors and skin self-examinations in melanoma patients, is effective in promoting short-term improvements in these activities, suggest researchers from Rutgers Cancer Institute of New Jersey and University of Virginia Center for Behavioral Health and Technology.

Findings from the work were presented recently at the Society of Behavioral Medicine Annual Meeting in Washington, D.C.

According to the National Cancer Institute, more than 1.2 million people in the United States have a personal history of melanoma – considered the deadliest of skin cancers – and are thus at an increased risk for disease recurrence and new skin cancers. Research has shown that a majority of these individuals do not sufficiently protect themselves from the sun or follow recommendations to conduct thorough skin self-exams that can facilitate early disease detection.

Results from several studies have shown promise with regard to improving patients’ engagement in skin self-examinations, but there is a lack of intervention studies targeting sun protection behaviors in this at-risk population.

Aiming to promote both sun protective behaviors and skin self-exams among melanoma patients, Elliot J. Coups, PhD, a behavioral scientist in the Cancer Prevention and Control Program at Rutgers Cancer Institute, and colleagues developed an Internet intervention called mySmartSkin, according to a media release from Rutgers Cancer Institute of New Jersey.

A sample of 384 individuals (40.9% response rate; median age 61.5 years) who were diagnosed and treated for stage 0 to 3 melanoma from 3 to 24 months previously were recruited to the study. Participants were randomized to receive their usual clinical care or to have access to the mySmartSkin intervention that promoted sun protective behaviors as well as skin self-examinations, including use of an online body mole map.

Self-reporting of sun protective measures (sunscreen, shade, protective clothing) and skin self-exams were assessed prior to the start of the intervention and 8 weeks afterward.

There was a significant increase in engagement of sun protection behaviors for those who participated in mySmartSkin compared to the usual care (control) group over the 8-week period. At the 8-week follow up, the percentage of individuals who had conducted one to two skin self-examinations was significantly higher in the web-based intervention group (47.5%) compared to the control group (23.9%).

Also, the percentage of participants who had conducted a thorough skin self-exam increased significantly in the mySmartSkin group from the start of the intervention (4.9%) to 8 weeks (29.5%) compared to the control group (9.5% and 7.5%, respectively).

“This project is somewhat unique in targeting both skin surveillance and sun protection behaviors among people diagnosed with melanoma. Results to date suggest the mySmartSkin intervention can help patients improve these important skin cancer-related behaviors,” notes Dr Coups, who is also an associate professor of medicine at Rutgers Robert Wood Johnson Medical School.

“Our use of a web-based approach for delivering this intervention will facilitate future efforts to disseminate it to a broader group of melanoma patients and to potentially examine its impact on other groups at increased risk for melanoma, such as first-degree relatives of melanoma patients.”

Coups adds that future study on this topic should focus on longer-term behavioral outcomes and examination of the intervention’s mechanisms and whether it is equally effective for different patient subgroups.