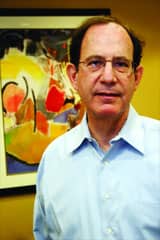 The word “laser,” as we all know, is an acronym for “light amplification by stimulated emission of radiation.” It has long ago shed the capital letters normally used for acronyms, and it is now in such common usage that I suspect that in a generation or two the derivation of the word will disappear from some dictionaries, and the term “laser” will be defined by what it is and does and not where it comes from.

For the fun of it, I looked up “laser” in my now-venerable 1994 edition of the McGraw-Hill Dictionary of Scientific and Technical Terms. Following “laser,” there are no fewer than 48 entries for terms beginning with “laser,” from “laser altimeter” to “laser welding.” Would you care to guess how many of the 48 are devices or procedures for the medical use of lasers?

The answer is exactly one—and it’s a term that few physicians, let alone laypeople, would be familiar with: laser photocoagulator. (For the record, it’s a device used to repair a detached retina by producing scarring that welds the retina back together.) Other than this, 13 years ago no other medical use of lasers had progressed far enough to be described in this rather comprehensive compendium of scientific knowledge.

Lasers are such a pervasive part of plastic surgery and dermatology practices today that it’s hard to imagine life without them—just as it’s hard to imagine life without cell phones and digital video recorders. For most practitioners, the questions are no longer, “Should I purchase a laser, and, if so, what kind?” but “How many lasers do I need in my practice?” “When should I upgrade my current lasers?” and “Should I purchase or lease my lasers?”

Lasers are also now an integral part of your business strategy. Many physicians use them to establish a relationship with a patient, especially a patient who cannot afford surgery immediately or who is skittish about going under the knife. They want to use the positive results from laser treatments to build trust in themselves and make themselves the patient’s first choice when he or she eventually decides to undergo a more invasive procedure.

Once a patient has begun to have aesthetic surgery, the strategy is often reversed. The physician may endeavor to keep the patient coming in for laser skin treatments after the major surgical work is performed. Either way, the laser has not only become a major force in medical technology, but it has become an extremely useful practice-management tool as well.

The annual ASLMS medical laser conference is coming up next month in Dallas. So put on your thinking caps, learn all you can at the show, and determine the best way that purchasing your next laser can help your practice grow.