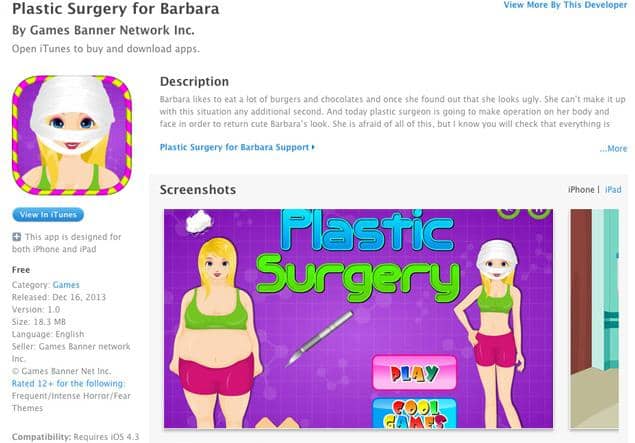 One game’s description reportedly read like this: “This unfortunate girl has so much extra weight that no diet can help her. In our clinic she can go through a surgery called liposuction that will make her slim and beautiful. We’ll need to make small cuts on problem areas and suck out the extra fat. Will you operate on her, doctor?”

Is this just fun and games or are these apps taping into something far more dangerous?

“Cases of eating disorders and body dysmorphia is at it’s highest, with 70 million worldwide. And 90% of those who struggle with how they look and feel are young girls between the ages of 10-25,” explains Deborah Serani, PsyD, a childhood behavior specialist at Adelphi University in Garden City, NY.

“Apps like this create an invitation for body dissatisfaction instead of teaching young girls – and boys – to embrace their own uniqueness. These apps imply that in order to be successful, popular or beautiful, one has to change,” she says. What’s more deceptive is that this ideal of beauty is unrealistic and unattainable. If we can teach others that what makes us different is what makes us beautiful, there’d be less body dissatisfaction and less mental health disorders.”

Louisville, Kent./New Albany, Ind. board-certified facial plastic surgeon Donn Chatham, MD, agrees. “Encouraging nine-year-old girls to participate in planning a virtual cosmetic surgery on a chubby subject in order to achieve an impossible body type strikes me as very, very wrong,” he says. “There is no redeeming message or lesson in this sort of misguided app. It says to children that: 1) an overweight young person needs surgery, 2) a ‘perfect’ desirable body can be obtained easily, and 3) plastic surgery is a game.”

Chatham sums it up like this: “There is enough confusion already, even among adults about what constitutes healthy cosmetic surgery. Encouraging children to consider altering their bodies is not only unhealthy but irresponsible.”

He’s not the only cosmetic surgeon up in arms over the controversial apps.

“Not only does this app set a poor precedent, suggesting that an overweight child could simply have liposuction to improve body image, but [it] introduces the idea of plastic surgery at far too young an age, where lifestyle changes are paramount,” shares John Layke, DO, a Beverly Hills, Calif-based plastic surgeon. “It is tasteless and poor form on the developer’s part,” he adds.

“The apps seem kind of obnoxious and immature, [and] hopefully not many people pay attention to them or play them as anyone can make an app these days,” says Austin, Texas-based plastic surgeon Jennifer Walden, MD.

The new president of the American Academy of Cosmetic Surgery Jane Petro, MD, adds that “a cosmetic surgery game that reinforces negative body images, and enforces the idea that ‘problem areas’ exist, which can be ‘fixed’ in an easy way through surgery reinforces inappropriate social and medical values. An app like this is not intrinsically dangerous, but its use by young children who are still formulating their own body image may certainly be harmful.”

Susan M. Hughes, MD, an oculoplastic surgeon with offices in New Jersey and Philadelphia, says these kind of apps trivialize plastic surgery.  “They set a potential patient and more especially young girls up to expect liposuction to be an easy cure all to fix it. Liposuction is ideal for patients with small problem areas that are anomalies like large saddlebags that stand out when the rest of the body is otherwise well proportioned, once their bodies have finished developing.”

What do you think? Let us know. Take our online poll here.

When Your Son Suddenly Becomes Your Transgender Daughter

The Ugly Side of Russia's Plastic Surgery Industry?