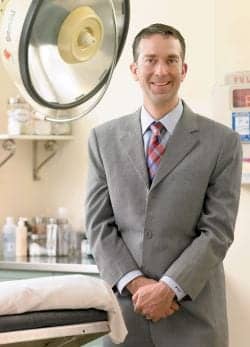 When walking into John Pedersen, MD’s Akron, Ohio, office, one must take a step back and ask: Is this guy a plastic surgeon, or is he in the bra business?

Actually, the answer is both. Pedersen, a board-certified plastic surgeon, is a go-to-guy for breast augmentation, breast reconstruction, and breast lifts as well as new and gently used bras.

Unlike many top plastic surgeons, Pedersen doesn’t sport scrubs or a finely tailored suit when meeting with prospective patients. He proudly wears a black-and-pink Breast Oasis T-shirt to draw attention to the nonprofit he founded in 2009. 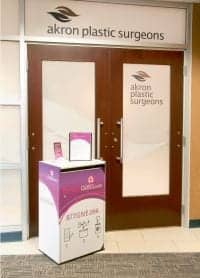 Breast Oasis aims to donate bras and hope to women who have neither. So far, it has donated 100,000 bras to women in need across the country, and plans are in the works to expand its reach internationally, including in disaster zones. Major retailers even want to partner with the organization.

The idea for Breast Oasis came to Pedersen naturally. He and his group have performed thousands of reconstructive and cosmetic breast surgeries, which made Pedersen wonder what women did with their old bras now that they had new breasts. He supposed they likely threw these often expensive garments out or left them to gather dust in a drawer. His wife, gynecologist Sejal Pedersen, MD, said that women in homeless shelters and rape crisis centers often need bras.

And this is how Breast Oasis was born. Patients now can donate bras at participating doctors’ offices, where they are checked, sorted, laundered, and certified before being gift-wrapped for delivery to a local crisis or homeless center. Each bra is labeled with a bra identification number (BIN). Women are encouraged to visit the Breast Oasis Web site and offer messages of hope and encouragement to the bra recipients using their BIN. This creates a virtual oasis for women in need.

“Whatever you put in, you will get out,” Pedersen promises. “You can simply collect donations in the office or go out there and host a community bra drive.” 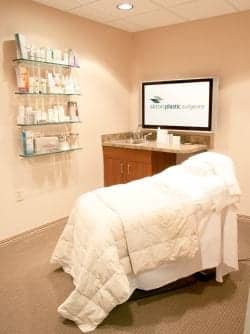 “It is an emotional and a material gift at the same time,” he says.

And it is a gift that is well-received time and time again, says Dana Zedak, the director of community relations for the Battered Women’s Shelter and Rape Crisis Center of Summit and Medina Counties in Akron, Ohio. Her center was the first to receive bras from Breast Oasis in 2009, and it has accepted hundreds of them since.

“I took a new woman into a shelter, and as I was going through the orientation, I asked her for her bra size and if she needed any,” Zedak says. The woman, like many before her, came to the shelter with nothing more than a backpack. “She just started crying. She said, ‘Oh, my God. You guys think of everything. I don’t even have a bra right now!’ “

There are stories like this one behind each and every donation. This is why W. Grant Stevens, MD, the medical director of Marina Plastic Surgery Associates in Marina del Rey, Calif, jumped on this bandwagon early and urges all of his colleagues to do the same. “All of the women involved have benefited; both the donating women as well as the recipients,” he says. “This is a wonderful program which should be adopted in every American Society of Aesthetic Plastic Surgeons member’s office.” 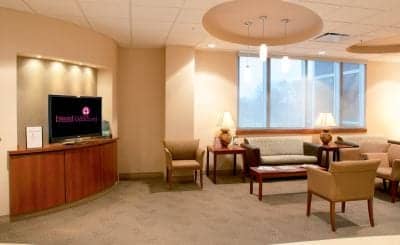 It’s a win-win, Pedersen adds. “Women have bras that they didn’t like or don’t wear, but keep in drawers, and donating them allows them to help other women and get in contact with a local plastic surgeon.”

Community bra drives can be an important gateway to new patients. This connection and foray to the community can be critical. Like in many other cities, there is a turf war in Akron as noncore doctors encroach on core specialists’ territory.

“We have obstetricians doing lip augmentation, ophthalmologists doing breast implants, and ear-nose-throat doctors doing liposuction,” Pedersen says. A lot of prospective patients may think that anyone who wears a white lab coat is proficient in any and all medical procedures, but that is far from the truth, he notes. 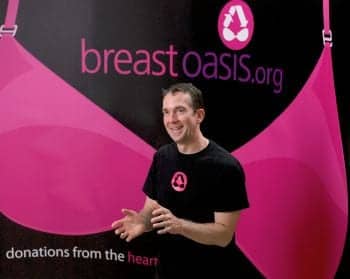 Dr Pedersen talking with associates about Breast Oasis during one of many plastic surgery industry events.

Unfortunately, many of these patients realize the hard way that a weekend course in liposuction does not a qualified plastic surgeon make. Getting to know prospective patients early on through bra drives and other community events may drive them to your practice as their first and final stop.

As it stands, about 20% of Pedersen’s time is devoted to all things Breast Oasis. The other 80% is spent performing plastic surgery along with his two partners Michael G. Parker, MD, and Douglas S. Wagner, MD.

Growing the practice is important to all of them. One of Pedersen’s focal points is postbariatric surgery body contouring. He is the director of Summa Heath System’s Postbariatric Body Contouring Program in Ohio.

The program “is one-stop shopping for postbariatric surgical candidates,” he says. “They come here for preoperative nutritional counseling and other follow-up appointments. Then they come back in about 18 months after weight-loss surgery and are ready for contouring.” Each year, about 200,000 people undergo bariatric surgery such as gastric banding and gastric bypass, according to statistics from the American Society for Metabolic and Bariatric Surgery.

Surgeons have been working to perfect the proper order of these contouring procedures. “Panniculectomy typically comes first, and then 40% go on to have a second procedure, whether breast reduction, breast lift, brachioplasty, or lower-body lift,” he continues.

REACH FOR THE SKY

First and foremost, Pedersen is a surgeon, but he plans to take philanthropy, and Breast Oasis, to the next level. He is now spearheading a nanophilanthropy zeitgeist that seeks to change the way plastic and reconstructive surgeons provide access in, and to, remote areas.

The key is technology. “Let’s say you read about somebody from Australia who was in bad car accident and needs reconstructive surgery, but can’t afford it,” he explains. “We can use the Internet to raise monies globally for this patient and make sure a local surgeon has what he needs to perform the surgery.” He envisions a Web site where donors can choose a patient and send earmarked money via the Internet. “It can be as little as two or three dollars,” says the father of three.

Today, Landon Pryor, MD, is a plastic and reconstructive surgeon with Affiliated Surgeons of Rockford and the medical director for the Rockford Center for Aesthetic Plastic Surgery, Rockford Health System. When Pedersen launched Breast Oasis, Pryor was completing a fellowship in Aesthetic and Breast Reconstruction at Cleveland Clinic in Ohio and was among the first to sign up.

“It’s amazing how much momentum Breast Oasis has generated since the beginning,” he says. “The patients and recipients of donations are the driving force. The response from the community has been tremendous.”

It’s been a whirlwind. “We have grown tremendously over the last few years,” he says. Pryor now sends 1,000 donated bras to a local rescue mission at least four times a year.

See also “The Breast of Times” by Denise Mann in the May 2011 issue of PSP.

And Breast Oasis is still growing. The second phase of Breast Oasis strives to help educate women about breast cancer. Pedersen lost his mother to breast cancer when he was 35 years old. He will soon be including a breast self-exam guide with each bra to encourage early detection of breast cancer when it is in its most treatable form. The next wave will use nanophilanthropy to provide funding on a global scale for women who need breast reconstruction but don’t have the resources. Study after study shows that women who undergo breast reconstruction after mastectomy reap profound psychological and cosmetic benefits.

Pryor is betting on him to pull it off, too. “He is an innovator, and he has a lot of energy,” he says. “He will make it work.” We agree: There doesn’t seem to be anything that Pedersen, a seasoned marathon runner and tae kwan do black belt, can’t do if he puts his mind to it.

Denise Mann is editor of  PSP. 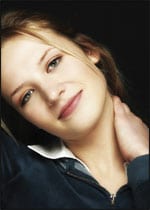 Should Couples Learn to Check Each Other’s Moles?