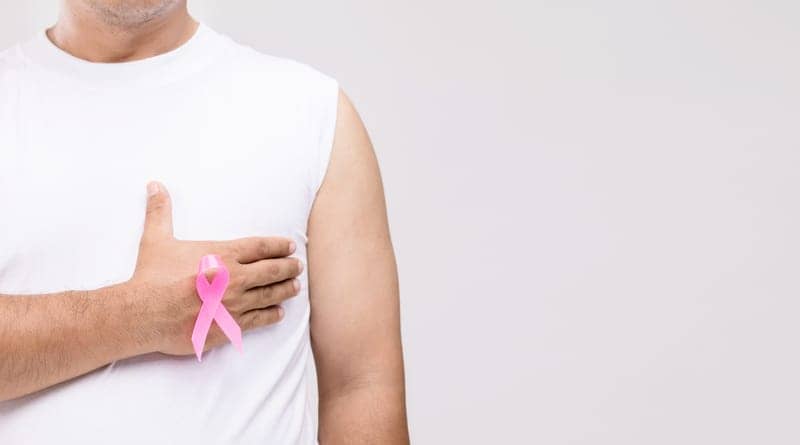 According to BreastCancer.org, in 2021 approximately 2,650 men are likely to receive a breast cancer diagnosis. About 530 men are expected to die.

A reason this disease often goes undetected in men for longer than in women is because men have not performed regular self-breast exams and/or are unaware of risk factors. Valerie Gorman, MD, FACS, chief of surgery and medical director of surgical services at the Baylor Scott and White Waxahachie, Texas Surgical Specialists/Texas Breast Center, says risk factors include increased age (the average age of diagnosis is 68), increased estrogen exposure (such as via hormonal medications, obesity, liver disease, or environmental estrogens), genetic mutations (such as BRCA1/2) within the family health history, and radiation exposure.

In addition, when a primary care physician diagnoses a male patient with breast cancer and recommends a breast specialist like Gorman, or M. Michele Blackwood, MD, chief of section breast surgery at Rutgers Cancer Institute of New Jersey, professor of surgery at Rutgers Robert Wood Johnson Medical School, Blackwood says men often assume the choices for plastic and reconstructive surgery are extremely limited, sometimes assuming his only option will be a full mastectomy. But, similar to their female patient counterparts, Blackwood explains that breast cancer treatments for men are not one-size-fits-all. Gorman says breast-conserving surgery can be viable option, depending on the case. The variety of oncoplastic surgical solutions now available for male breast cancer survivors have enabled them to pursue a better quality of life post-procedure.

How have your male breast cancer patients handled their diagnosis?

Gorman: It’s an adjustment for them at times to have a disease that is most commonly found in women. But many of my male cancer patients, previously treated, have become advocates in their local communities. They have really taken this opportunity to make sure more men are aware of the risk of breast cancer.

Patients at our facilities in New Jersey feel relatively safe with our staff, but I suspect the level of anxiety and depression after any cancer diagnosis for any patient is relatively high—though we probably address it more in women than we do in men. However, I’ve taken care of several men who were diagnosed with breast cancer after I took care of their wives who also had breast cancer. They handled it well because they saw how well their wives were doing. If it’s a localized small breast cancer, men will typically have a 97% to 98% chance of survival.

What type of oncoplastic surgical procedures, other treatments, and medications are currently available for men? What type of feedback have you received from patients?

Gorman: Most of my male patients choose mastectomies but ensuring appropriate scar reduction and smooth chest wall surface allows them to have a good cosmetic result. The nipple-areola can also be reconstructed or tattooed for improved cosmesis.

Blackwood: I’ve done all different types of procedures on men. Although a mastectomy was the treatment of choice for many years (because people didn’t think men cared about the way they looked), now men, especially the younger ones, do care. We recommend chemotherapy if needed, but it depends on the cancer. Many times we can offer the patient a lumpectomy and radiation.

Over the years, we’ve become more creative in how we deal with men and breast cancer. I recently took care of a 40-year-old male weightlifter. After all of his options were discussed, he was adamant about his decision to not have any radiation. He also wanted to look good running around the beach with his kid. So, in his case, we were able to give him a very acceptable symmetric result, with a mastectomy, then we used liposuction for fat grafting, and he was very happy with the outcome. We also tattooed a nipple on him. The 3D nipple tattooing is a really creative option. It’s safe and it looks good symmetrically with the other side of the breast.

Another male patient of mine had a lot of breast tissue on both breast so we did a bilateral reduction to remove the cancer that was growing one side. Then he got radiation, and that was a nice option.

We did DIEP flap reconstruction surgery on a patient several years ago (removing the fat from his abdomen to create a breast), and the patient loved it because he got a nice flat tummy at the end of the procedure using his own belly tissue.

Implants are also another option. The new implants are much safer than the previous ones, so we’ve had much success using those. We’ve placed implants into men after a mastectomy and they matched the other side symmetrically, which is very acceptable. They’re softer, look good cosmetically, and are very appropriate for men. But if they never go to the beach or rarely walk around with their shirt off, some men will stick with a general mastectomy. None of my male patients have ever requested a prophylactic mastectomy to prevent a cancer diagnosis, and I don’t recommend it. We’ve also learned a lot from our plastic and reconstructive collaborating surgeons who specialize in transgender procedures. In fact, we have a very talented plastic surgeon at our facility specifically who does a lot of transgender work. So I’ve personally learned a lot more about the male chest and breast reconstruction directly from him.

We also treat male breast cancer with medication the same way we do with our female patients. For men, we mostly prescribe tamoxifen if their breast cancer is estrogen-sensitive.

PSP: Has use of the Hologic LOCalizer in the operating room been helpful when conducting male breast cancer procedures?

Blackwood: Many times in men it’s actually easier to find the tumor than it is in women. Self-examination helps to identify lumps early because most men have very little breast tissue. Therefore, I don’t always need to use the Hologic LOCalizer. It really depends on the type of surgery. If the patient has a very large breast and the tumor is hard to feel, that’s when the device becomes in handy. I would then proceed with a lumpectomy.

PSP: How can oncoplastic surgeons work together collaboratively to serve the patient’s needs?

Blackwood: Doctors should collaborate closely to discuss the patient’s size, desire for how he wants to look, and the shape of the breast. Working with a talented plastic surgeon and breast cancer surgeon, together can help the patient find a much more favorable cosmetic outcome.

When doing a mastectomy in men, many times the tumor is right underneath the nipple. And when that is the case, you have to be very careful that you don’t leave cancer behind in the nipple. That’s another discussion to have with the patient.

What are some of the key symptoms of male breast cancer?

Blackwood: Breast cancer in men usually presents itself as a unilateral breast lump. So if a man feels a lump, particularly on one side, he really needs to see a doctor. There may also be bleeding discharge from the nipple. But the good news is that their primary doctors are now more aware that men can get breast cancer, so men are starting to receive the diagnosis much sooner than before. One of the first things we do after examining them is a mammogram, and it works. If we see something suspicious such as calcifications or something specific in the breast map, we’ll do a needle biopsy (similar to our female patients). If it’s cancer we’ll proceed with genetic testing for gene mutation.

Another thing I recommend (so there are no surprises) is the patient receive a testicular exam through a doctor, urologist, or ultrasound. Because every once in a while, a lump on the testicle that is diagnosed as cancer can give off hormones that may affect the size and shape of the breast tissue. So it’s actually the testicle that has the cancer and the breast issue is just a side effect (so it’s not breast cancer).

Blackwood: This benign breast lump can be found on one or both sides. It can happen in men being tested for breast cancer or it can happen in men who use certain medications for high blood pressure or psychiatric illnesses. Use of marijuana may also be a factor, according to studies.

What tips do you have for men who have received a breast cancer diagnosis? How can they proactively advocate for the support and treatment they need?

Gorman: Patients should make sure their concerns are heard by their physicians, and that their doctor completes their workup in a timely manner. My patients have been very proactive in pursuing the correct treatment and following guidelines to ensure cancer does not recur. So it’s important to be your own advocate to ensure you get the correct diagnosis; educate yourself on the options for treatment; ensure that you have pursued genetic testing to help yourself and your family members that may share the same results. Genetic testing is very important because if the patient’s case is associated with a genetic mutation that runs in the family, that can make a difference in their treatment options and can make a difference in the lives of some of their family members that may carry the same mutation.

Blackwood: Seek a fellowship-trained breast cancer surgeon to guide you through the treatment process. Choose a doctor who specializes in breast cancer patients on a daily basis and is knowledgeable about the latest-greatest treatment options available. Do a self-examination. It’s relatively easy for a man to check his own breast. A primary care doctor can also do it during a yearly physical, right after listening to the heart and lungs.

What are some other ways to promote male breast cancer awareness at large?

Blackwood: The best place to reach people and educate them is where they feel most comfortable. It would be good if men who’ve survived breast cancer could reach out to others in their local church congregation, golf group, or barbershop.

Connecting with people through a trusted source gives you credibility. You can also reach men through the women in their lives and encourage them to tell their husbands, fathers, brothers, and other male figures to get checked for breast cancer. For example, I’ve done plenty of outreach about breast cancer for females, through their church pastors, PTA organizations in local school districts, book clubs, and hair salons.

3 Things You Should Always Get Checked By a Dermatologist