Daniel Man, MD, a plastic surgeon in Boca Raton, Fla, has refined the facelift and has developed a technique that he says eliminates the risk of ear deformity.

The procedure begins with a small cut into the outer rung of cartilage on the top front of the ear. The incision continues under the ear, following the natural contour where the ear attaches to the head, down toward the bottom of the ear, to just above the earlobe. Then, the incision comes back to the front, running along the inside of the outer ear cartilage and up to the top, meeting the start of the incision. Man works through these incisions to tighten underlying structures. To correct the sunken appearance caused by sagging skin he uses fillers and tissue expanders placed under the skin.

The only part of the incision that is visible is the small cut made into the upper cartilage of the ear. The technique also prevents a loss of the natural hairline at the top of the ear that occurs with a traditional facelift. For patients who have had a prior facelift, the technique can also be used to correct a "dropped" ear by tightening the supporting tissues above the ear. 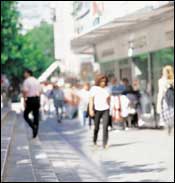