Plastic surgery procedures are up 5% since 2011, according to the newest statistics from the American Society of Plastic Surgeons (ASPS). This increase was largely driven by demand for minimally invasive procedures. 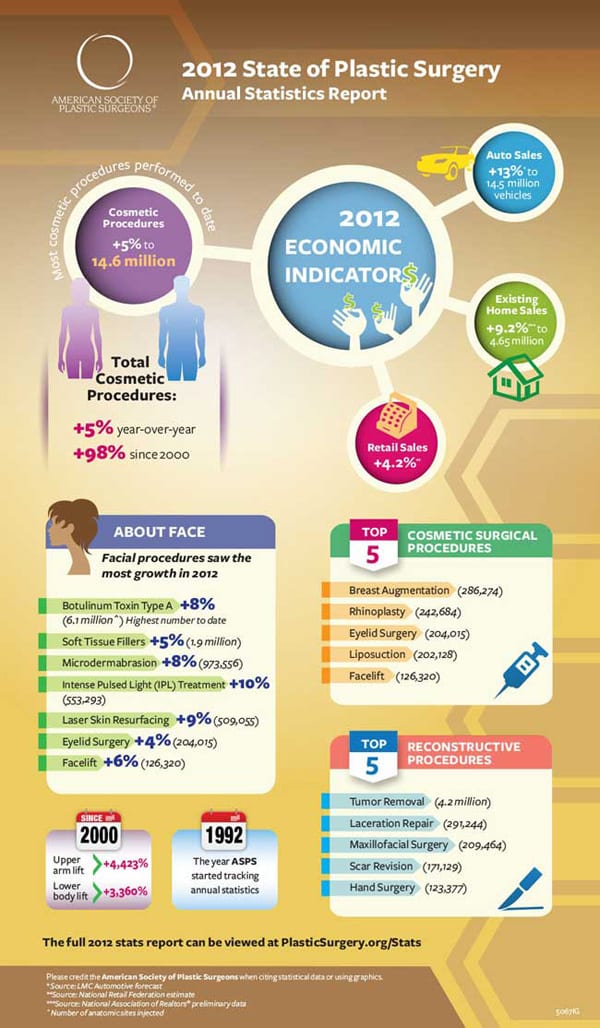 “Our annual statistics serve as a snapshot regarding the plastic surgery industry,” says ASPS President Gregory Evans, MD, in a news release. “For the third consecutive year, the overall growth in cosmetic surgery continues to be driven by a significant rise in minimally invasive procedures, while surgical procedures remain relatively stable. We are aware, however, that patients who begin with less invasive treatments with a plastic surgeon may opt for more invasive, surgical procedures once required.”

Facial rejuvenation procedures experienced the most growth in 2012. Facelifts and eyelid surgeries were up, while 2012 marked the highest number of botulinum toxin type A (Botox®, Dysport®) injections performed to date. Other facial rejuvenation procedures like soft tissue fillers, laser skin resurfacing (509,000 procedures, up 9%) and microdermabrasion also saw sizable increases, according to the new statistics.

Reconstructive breast reduction rates continue to rise, with more than 68,000 procedures performed last year, up 8%, according to the new statistics.

“Botulinum toxin and dermal fillers still sweep the non-surgical category, as the number one and number two most popular treatments,” she says. “The largest group of fillers falls in the hyaluronic acid category wth almost three quarters of the total, and there was increase over last year of 5%.”

The number of Botulinum toxin injections was up by a healthy 8% over last year. “This is surely fueled by new indications and more men as well as women seeing preventative options and early intervention,” Lewis says.

10 Signs You Just Got Bad Botox

‘Safe’ Tanners Who Use Sprays and Lotions Less Likely to Get Tattoos and Piercings than Frequent Sunbathers and Tanning Bed Users, Baylor Study Finds