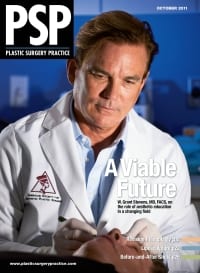 Rotten to the Core

DEAR EDITOR:
Several months ago, Plastic Surgery Practice (PSP) ran an article by Grant Stevens, MD, discussing his opinion of “core” cosmetic surgery providers.1 First, I want to say that Stevens has always been one of my heroes as he is a scientist and clinician who has made many contributions to cosmetic surgery. Having said that, I feel that many of the statements and opinions within the article are jaded and aimed at limiting “who should do cosmetic surgery” based solely on one’s specialty. All surgeons owe the public safe treatment with predictable outcomes, but there are so many variables that affect this. One’s original specialty training can’t be the exclusive determinant. No specialty “owns” the face or body. Competence should be judged by the individual, not the blanket specialty.

In Stevens’ discussion (and in a PSP article by my friend Jonathan Sykes, MD,2) the word “core” has taken on a new meaning in the discussion of cosmetic surgery qualifications. All of a sudden, a group of self-appointed (if not self-anointed) leaders in several specialties are trying to pontificate (and in some cases, legislate) their “special” people as the chosen ones. These specialties are trying to convince one another (and those who will listen) that they hold the keys to the cosmetic universe.

As education and technology progressed, other specialties began to incorporate cosmetic surgery procedures into their core training. Please note that “core” is used properly in the previous sentence, as it relates to what is taught to the average resident in the average specialty program. This use of “core” is a quantifiable and proper reference. This means that dermatologists, ear, nose and throat (ENT) doctors, oral & maxillofacial surgeons, ophthalmologists, and other specialties began teaching and performing cosmetic procedures in their residency programs and now represent core.

Numerous materials are available to show that organized plastic surgery has also railed against other specialties that they are now embracing as core.3 Turf wars are unfortunately passed off as “public protection” to those who are gullible enough to believe it.

Stevens refers to “dentists doing breast surgery and liposuction.” There is no state in the US that allows any general dentist to perform breast surgery or liposuction. There are oral and maxillofacial surgeons with medical degrees, multiple years of general surgery and cosmetic fellowships who may perform these surgeries, but how is this any different from dermatologists, oculoplastic, or ENT/facial plastic doctors that perform the same?

I performed 5 years of hospital internship and residency training, and rotated through all the major medical and surgical services. All I do is cosmetic facial surgery. Being a single-degree oral and maxillofacial surgeon, I only operate above the collarbone, but I do more of it than most “core” specialists in my state. I perform two facelifts a week, on average, and have an extremely busy surgical and minimally invasive practice. I am also the largest solo provider of Botox Cosmetic in my state. So, since I do more of this than the “core,” does that mean I enter the core circle and displace some other core specialty that does less? Of course not. The whole categorization is silly. In addition, many of the “core” that rally against other types of doctors doing injections have nurse injectors. You can’t have it both ways—raging against doctors who inject, but allowing nurses to do so.

The public, in general, has not drank the Kool-Aid. They realize that numerous specialties can provide cosmetic procedures in a safe and effective manner. The “only us” message and the continual demonization of other specialties does have one effect—to scare and confuse the public about cosmetic safety in general. This hurts all specialties. It is great to be proud of one’s specialty, and there will always be collegial favoritism. It occurs with sport teams, political parties, and religions. Open-minded people who see the world as it is and not as an insecure threat to their existence will appreciate individual contributions from all specialties. Judge the person by what they do and how well they do it, not by preconceived prejudices that are aimed only at defamation based on economics.

The tired excuse that the concerned are “only out to protect the patient” is irrational. In 2011, NBC’s TODAY Show show and all other major news outlets4-6 ran a piece about a patient who was maimed—unable to close her eyes after cosmetic blepharoplasty performed by a board-certified plastic surgeon from New Jersey. I really felt sorry for the doctor as they mentioned his name and location and probably did not reflect both sides of the story. What is notable is the fact that the cosmetic bulletin boards, blogs, and plastic surgery sites were totally silent on the incident. If that surgeon was a member of one of the “enemy” specialties, they would have made a national crusade out of the misfortune. That surgeon would have become the poster boy of, “See, we told you they shouldn’t do cosmetic surgery.”

If this group was truly interested in protecting the public, they would, in fact, include members from any specialty that performs injections or cosmetic surgery in general, with the goal to spread best and safest practices down the line. Education should be seamless and giving, and never limited by competition.

About the time you feel that you are superior to others is the time that you become humbled.

Pressure May Be On Allergan to Strike a Major Deal, As Botox Gets Another Rival