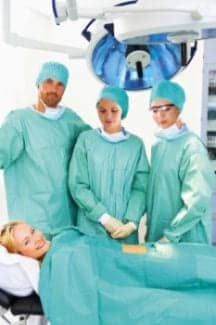 “My initial surgical step is to create a 3-cm superior navel incision around this ubiquitous and universal scar,” explains Robert A. Shumway, MD, FACS, a La Jolla, Calif-based cosmetic surgeon who has performed thousands of TUBA operations.

“The TUBA approach is achieved entirely via the upper aspect of the navel; that is, its superior rim,” he says. “Therefore, one need not even cut the navel. I use the upper navel fold as a cosmetic hiding place for my incision. After this small, single incision, I have total access to each hemi-thorax. From this exquisite vantage point, I can generate either a pre-pectoral or retro-pectoral surgical pocket by blunt dissection, followed by the appropriate use of tissue expanders. The expanders are subsequently removed and followed by the insertion of tightly rolled-up saline breast implants. Once the implants are filled to their appropriate volumes, one is free to adjust implant fill and position, as needed.

“The umbilicoplasty closure and beautification of the navel is quick and efficient because there is but one closure site. This ‘one incision’ advantage translates into less potential wound infections, decreased hypertrophic scarring, decreased surgical time, and absolutely no breast or thoracic scars, whatsoever. Furthermore, I have never experienced any navel skin infections or bleeding issues with TUBA.”

Gerald W. Johnson, MD, of Houston invented TUBA in 1991. Shortly thereafter, Shumway mastered the procedure and began developing his own type and style of TUBA approaches.

Figure 1-2. Two female patients (above and below) before the TUBA procedure (left) and postoperatively (right).

“Dr Johnson was initially performing subglandular approaches; but the subpectoral placement with the use of tissue expanders was developed several years later,” Shumway says. “It is important to know that today we perform TUBA either above or below the muscle depending on the needs and requirements of our patients.”

When teaching TUBA to other physicians, Shumway informs them that they must achieve excellent results with their first few procedures or they will never progress to the level of expert and, eventually, they will abandon TUBA.

Shumway wants to ensure that all TUBA surgeons first know how to comfortably perform various types of breast surgery, and that they have already taken the time to become an experienced breast surgeon. “TUBA is not for the novice surgeon,” he says. “Obviously, this particular procedure is best performed by somebody who has ‘been there and done that’ many, many times before.”

If TUBA is such an innovative approach, why is it not performed everywhere by everyone?

“First of all, there is a huge lack of information about TUBA,” Shumway explains. “And there are still only a handful of qualified physicians who can truthfully be called TUBA experts. For example, sometimes the TUBA procedure is advertised by various practitioners or clinics, but when a prospective patient shows up for a consultation, the clinic will engage in the old bait-and-switch technique and advise the patient to take a different approach.”

One option, for instance, is the coupling of TUBA with abdominal liposuction or even with other liposuction locations. A surgeon may include TUBA with mastopexy. The Benelli, vertical, horizontal, or Wise pattern mastopexy can be utilized in concert with TUBA, Shumway notes. (Over the years, he has produced TUBA DVDs and authored many medical articles and textbook chapters on combination TUBA procedures.)

“The most attractive aspect about TUBA is its extremely fast patient recovery time,” he adds. “Since there is only one rather small navel incision, the patients are pleased to wear only a simple Band-Aid on postoperative day 1. Furthermore, my patients are enjoying exercise within 1 to 2 weeks.”

Shumway emphasizes that his patients are not troubled about navel wound care after TUBA because the sutures are dissolvable and there is never any deformity or scarring around the breast. Also, there is no navel wound tension from inherent local pressure that occurs around breast implants, as with other types of closures, and this virtually eliminates the evils of wound dehiscence.

In general, Shumway teaches TUBA endoscopically, so that surgeons who are learning this technique can visualize important anatomy and actually see the location of implant placement before they insert the prosthesis.

Therefore, TUBA is not a “blind” operation any more than other endoscopic procedures are “blind.” “For me, the learning and teaching process has always been very straightforward,” he says.

During a patient consult, Shumway explains that she can get a breast implant inserted via the armpit or transaxillary, the breast or periareolar, the fold or inframammary crease, or the transumbilical. He does not push patients to decide one way or the other, he adds, but will explain the pros and cons behind each approach. 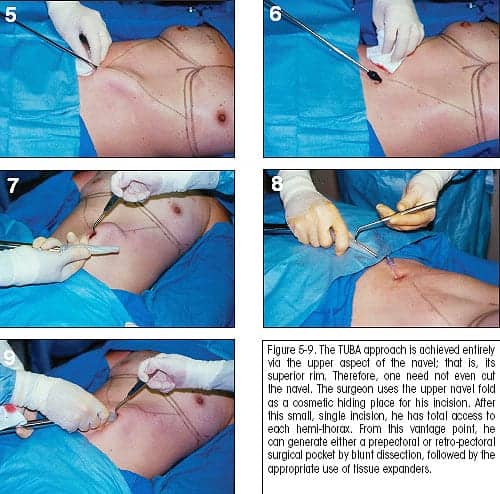 Shortly after TUBA appeared on the cosmetic surgery landscape, some physicians tried (unsuccessfully) to discredit it. “Initially,” Shumway says, “there were relatively few physicians who had heard about TUBA or understood TUBA. There were even fewer surgeons who knew how to perform TUBA. Occasionally, physicians felt threatened by this new surgical approach and possessed—even encouraged—common misconceptions about TUBA.”

A few of these misconceptions: irreversible internal organ damage, inevitable cosmetic asymmetry, abdominal scarring, or the total impossibility of such a technique.

“The TUBA approach is subcutaneous and is above the rectus abdominus muscle fascia, which means it cannot damage the internal organs of the body,” Shumway says. “People have also thought that TUBA won’t allow for the appropriate symmetry. Actually, you are putting tissue expanders in first, so you know exactly what things are going to look like before you put the implant in.”

One thing Shumway hopes will help spread the truth about TUBA is more surgeons, medical boards, and medical societies will approach it with an open mind.

He finds that patients approach him with specific ideas about their breast augmentation, and when he give them choices on how the implant could be inserted, “It’s really a no-brainer,” he says, “to have a small incision at the navel and be up and around twice as fast as any of the other procedures, and to do it under local anesthesia with IV sedation. No general anesthesia is needed.”

It’s all right for a physician to decide to reject the TUBA approach, he adds, as long as the decision is an informed one. “It’s OK to reject something or to not do it,” he says. “It’s completely a different ball game when somebody who doesn’t do it—who is also not good at it or has never done it—to say negative things about it.”

When it comes to your patients’ informed decisions, never try to talk them into a specific type of surgery, Shumway suggests. “I give patients long signature check-off lists with all of the possible complications. I explain to them that any or all of these bad things can occur with their chosen type of breast procedure. I give them my personal complication percentages for each item and provide patients with specific pros and cons relative to each type of surgery—TUBA versus any other approach. Since I offer my patients all of the possible augmentation options, I feel like I have truly allowed them to make an informed decision.”

In general, Shumway compares the above situation to visiting a Mercedes dealership and then asking them what they think about BMW products”The Mercedes dealer will say negative things about BMW every single time. However, if you wish to learn about the best of Mercedes, the Mercedes dealer and various associated mechanics will have the answers you seek,” he says. “In short, if patients want to learn about TUBA, then they should talk with physicians who routinely perform TUBA, as they glean further information from several different reputable sources and consultations.”

Shumway has performed thousands of TUBA procedures, and he has also contributed many papers and dissertations about TUBA at various national and international meetings.

“People come to me and maybe have a background in OB-GYN. They’ve been doing body surgeries for quite some time and will start to learn to do breast augmentations,” he says. “Cosmetic surgeons in training have sometimes been ordered by the American Board of Cosmetic Surgery to come train with me.”

See also "The Axillary Approach" by George John Bitar, MD, and Vinod K. Chopra in the October 2007 issue of PSP.

“Most importantly, physicians and surgeons need to fully dedicate themselves to the art of breast enhancement,” he says. “Once doctors learn this surgery, they will receive an influx of new patients because people will enter the practice and ask for TUBA by name. It is possible that TUBA may overshadow your other cosmetic procedures and literally take over your practice. I am always comfortably busy with my breast surgeries, but when TUBA became a part of my practice, TUBA became my practice.

“So, in summary, and not to sound overly brass, if you wish to trumpet TUBA then be prepared for a steady stream of new patients marching into your practice.”

Erica Verner is a contributing writer for PSP. She can be reached at plasticsurgery@allied360.com.

If Cosmetic Surgery Has a Working Market, Why Can’t Medical Care?