The Evolution of a Specialty 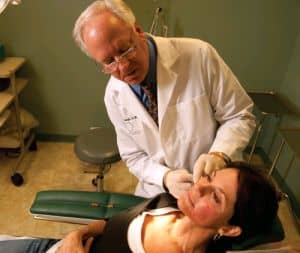 Erhardt relies on customer word-of-mouth exclusively and has “never spent a dime on advertising.”

It has been 30 years since plastic surgeon Walter L. Erhardt, Jr, MD, FACS, first hung up his shingle, and he has never spent a dime on advertising. Instead, Dr E, as he is affectionately known to peers and patients alike, generates new business through word-of-mouth.

It is nothing against advertising per se, but some of the methods used today to drum up business won’t bring in the type of patient he prefers. “I like the patients that can distinguish between value and cost, and the ones who are looking for the cheapest route are not the best patients,” he adds.

Erhardt speaks from experience, having watched the entire plastic surgery specialty evolve over the past 3 decades. When he first started practicing, most of the “newer” craniofacial and maxillofacial techniques that stemmed from World War II trauma care and breast reconstruction could only be done using tubed pedicle flaps. The aesthetic side of the specialty really hadn’t reached mainstream America and was mostly limited to the “rich and famous.”

THE WONDERFUL WORLD OF WALT 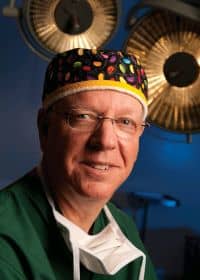 With the advent of many new procedures and technologies, Erhardt remains conservative when it comes to embracing untested or overhyped treatments.

Married for more than 40 years, Walter L. Erhardt, Jr’s wife, Carolyn, has played an integral part in managing her husband’s office since it first opened. The couple raised two grown daughters—their youngest is a pre-kindergarten teacher in Atlanta, and the oldest daughter has been working at Disney World in Orlando, Fla, for more 10 years.

Disney is familiar turf for the Erhardt family. Just a 5-hour drive from home base, the foursome often vacationed there when the girls were growing up.

“As a family, we also became interested in Disney animation artwork, and over the years we have acquired a nice collection of classic Disney artwork,” he says. These pieces include an original 1939 pencil drawing of Doc from the movie Snow White and the Seven Dwarfs and an animation cell of Jessica Rabbit from the movie Who Framed Roger Rabbit?. Both are currently displayed in his office.

“Jessica is the perfect animated character for a plastic surgeon’s office,” he says, referring, of course, to her voluptuous breasts, hourglass figure, and oh-so-shapely contours.

Also a wine connoisseur and avid golfer, Erhardt does not see himself retiring anytime in the near future. “I still love what I do, and as long as I am fortunate to have good health, I will continue,” he says.

“I don’t think there is a procedure that I do today that I do the same way I did when I was in my training,” Erhardt says from his office in Albany, Ga. And it’s the evolving, creative nature of the specialty that drew him to plastic surgery in the first place.

“I started out thinking I wanted general surgery, because I was swayed into medicine by my uncle, who was a general surgeon. But during training, I realized that I didn’t want to do cholecystectomies and hernia repairs over and over again,” he recalls.

All it took was one rotation in plastic surgery to convince him what he did want to do. “The procedures were interesting and sometimes bizarre, but always very creative,” he adds. “When I was in medical school, what could be accomplished aesthetically and with reconstruction was really pretty limited, and it took a great deal of creativity to obtain a good result.”

Erhardt received his bachelor’s degree in science from Roanoke College in Salem, Va, and his medical degree from the University Of Virginia School Of Medicine in Charlottesville. Then, he was off to Vanderbilt University in Nashville, Tenn, for his general surgery and plastic surgery residency.

Today, Erhardt’s practice is 75% aesthetic and 25% reconstructive, with the bulk of the reconstructive side being breast and facial reconstruction following skin cancer resection.

This diversification helped Erhardt’s practice stay afloat during the recession, when plastic surgery procedures were down on all counts. “When our aesthetic practice dropped off, the other didn’t, but we ended up working harder because the financial reimbursement for reconstructive procedures is less than what one gets from aesthetic procedures,” he says.

However, some of the reconstructive patients remain close to his heart. 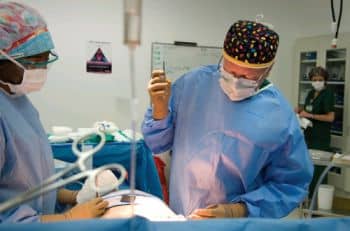 Erhardt’s practice is 75% aesthetic and 25% reconstructive, which he says helped keep his business going strong during the recession.

In fact, he often runs into a former cleft lip patient. “He’s a big, tall, strapping young man, and his face looks great,” Erhardt notes. “I fixed his lip and palate, and every time I see him I feel like I made a difference.”

Many people are quick to equate plastic surgery with vanity, but it’s much more than that.

“When you hear a story about breast reconstruction, otoplasty, or cleft lip or palate, and someone says, ‘This really made a difference for me,’ you begin to understand the effect we can have on changing people’s lives for the better,” he says.

His dedication to improving the lives of his patients is one of the reasons that he still does all of his own injections.

“I see physician assistants who are very adept at sewing up lacerations and doing injections, but if you can’t name the muscles you are putting the stuff into, maybe you shouldn’t be doing it,” he says. “It involves more than just rote training.”

He also sees a fair share of patients who got injections at local medical spas. “These are a steady source of patients who had problems with Botox and fillers, and need them straightened out,” he says.

SEPARATING THE HOPE FROM THE HYPE

The growing number of noncore physicians who are performing cosmetic surgery procedures with little training has strengthened Erhardt’s commitment to educating consumers and colleagues. He has served as the editor of Plastic Surgery News, and currently sits on the advisory board for two online consumer plastic surgery resources—The Consumer Guide to Plastic Surgery and Breast Implants 4you.com—where he suggests topics and thoroughly reviews articles for medical accuracy.

Plastic and reconstructive surgery has grown exponentially in the past several years. With the advent of many new procedures and technologies, Erhardt remains conservative when it comes to embracing the new.

That’s not to say he is resistant to new and emerging products or procedures. Instead, he prefers to adopt a wait-and-see approach, and relies on the tried-and-true, evidence-based methods. He is one of the clinical investigators with Allergan/INAMED for the Style 410 highly cohesive silicone-filled breast implant clinical study, and is optimistic that these so-called “gummy bear” breast implants will become an option for women in the United States.

Erhardt admits that the specialty has also taken some hits from the media with highly publicized celebrity plastic surgery disasters, as well as the plastic surgery reality television craze.

“It has given plastic surgery more visibility, and that has been good in that people think about it more and certainly people are more aware of what can be done in cosmetic and reconstructive surgery,” he says. “The commercialism of medicine has not been good for plastic surgery.”

Even though the public’s thirst for knowledge about plastic surgery has been educated via the media, “Some of the education hasn’t been good,” Erhardt notes. “They may be more knowledgeable, but they don’t always have a realistic idea of what can and can’t be accomplished. Watching some of these shows makes a person think that miraculous transformations are possible, even probable, in short periods of time with little or no risk. Patients need to know the whole story.”

Denise Mann is a freelance health writer in New York. Her articles regularly appear in WebMD, health.com, cnn.com, Arthritis Today, American Profile, and special sections of The Wall Street Journal. She is also the editorial director for several plastic surgery portals, including The Consumer Guide to Plastic Surgery.

EYE ON THE PRIZE

Walter L. Erhardt, Jr, MD, FACS, served as the president of American Society of Plastic Surgeons (ASPS) in 2001, and is still actively involved with the group—particularly with the young, up-and-coming doctors.

Anne Taylor, MD, is one of many young surgeons he has mentored over the years through his work at the ASPS. Now a clinical assistant professor of surgery at the Ohio State Medical Center in Columbus, Taylor met Erhardt in 2000 when he was on the ASPS board of directors.

“He would always ask, ‘What do the young plastic surgeons think?’ and give me a chance to offer my perspective on the issue,” she recalls. “He made it a point to include me and our whole group in his deliberations as president, and he always kept the future of plastic surgery in mind.”

In a word, he is and was a diplomat, she says. “I learned organizational skills and how to run a meeting and listen to all different viewpoints from him, and how to use this information to come up with a diplomatic, informed decision,” she adds. “You can tell that he generally cares about the person and is interested in their well-being. And that comes through in how he acts with everybody, whether a newbie or a veteran surgeon.”

The World’s First Recipient of a Second Face Transplant? A 43-Year-Old Who Says He Feels 22 Again

How to Decide Exactly Where to Get Fillers and Botox