How to Save a Life

How to Save a Life

Malignant hyperthermia can be fatal unless caught early

By Amanda R. Kirzner, DO, MPH

Malignant hyperthermia, an inherited disorder of skeletal muscle associated with the administration of certain general anesthetics, is one of the most feared conditions in all of anesthesiology. It is also one of the least understood.

Malignant hyperthermia affects an extremely small subset of patients who are exposed to anesthesia. However, it can be fatal, especially when an acute crisis is not recognized early enough. Plastic surgeons must understand the etiology of malignant hyperthermia and the interventions that can reverse an acute episode during a procedure.

IS YOUR PATIENT AT RISK FOR MH?

Malignant hyperthermia occurs across all ethnic groups in all parts of the world. It is seen more frequently in males than in females, with children under the age of 19 years comprising as many as 52% of all reported events.

Prior to any type of surgery, an anesthesiologist evaluates and questions the patient. They ask whether they or anyone in their family has ever experienced an adverse reaction to anesthesia. This questioning seeks to indirectly inquire about the incidence of malignant hyperthermia, which is an inherited condition. It is known to be inherited in an autosomal dominant fashion, but it may also have variable penetrance, or even arise de novo.

In normal muscle physiology, depolarization spreads through the muscle cell via the transverse tubule system, which then activates DHP (dihydropyridine) receptors located within the t-tubule membrane. These receptors are coupled to RYR1 (ryanodine) receptors, or calcium channels
located in the walls of the sarcoplasmic reticulum. Calcium release through the DHP receptors triggers the RYR1 receptors to release this calcium from the sarcoplasmic reticulum and into the intracellular space. In the intracellular space, calcium combines with troponin to cross-link actin and myosin, causing muscles to contract. Re-uptake of calcium within the sacroplasmic reticulum leads to muscle cell relaxation. 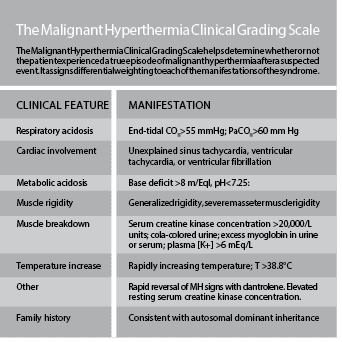 Malignant hyperthermia typically manifests as a hyper-metabolic crisis when the patient is exposed to certain volatile anesthetics, including halothane (not typically used anymore), isoflurane, sevoflurane, desflurane, or the depolarizing muscular blocker succinylcholine. The diagnosis is clinical and presumptive because more than 90% of malignant hyperthermia patients have a negative family history, and greater than half of the patients have had general anesthesia with no symptoms in the past.

Later signs of malignant hyperthermia include ECG changes related to hyperkalemia (which is typically present during instances of rapid muscular breakdown), ventricular ectopy/bigeminy, ventricular tachycardia or fibrillation, hyperthermia (which usually begins in the postoperative period), myoglobinuria (brown or tea-colored urine that typically appears 14 hours after the initial onset when plasma CK levels also peak), excessive bleeding, as well as a mixed metabolic and respiratory acidosis. Laboratory studies are not required for a diagnosis, but patients may exhibit one or more of the following, which help serve as a clue to the diagnosis:

MH TREATMENT PROTOCOL: WILL YOU BE PREPARED?

Most importantly, oxygenation and ventilation should be optimized by increasing inspired oxygen to 100% and increasing the tidal volume to try to minimize the end tidal CO2. If the patient is not already intubated, they should be intubated using only non-depolarizing neuromuscular agents if paralysis is necessary.

All volatile anesthetics should be aborted immediately upon suspicion of malignant hyperthermia. If possible, the surgical procedure should be immediately terminated. If the surgical procedure cannot be stopped at that point, it should continue using only intravenous anesthetic agents like propofol. Dantroline, the only known treatment for malignant hyperthermia, should then be administered. Dantroline depresses excitation-contraction coupling in skeletal muscle.

It is supplied as a powder, in a 20 mg vial containing mannitol and sodium hydroxide to maintain a pH of 9 to 10. It is then mixed with sterile water and warmed to enhance its solubility. A loading dose of 2.5 mg/kg should be given, followed by repeated doses of 1 mg/kg as needed. Generally, the effects of dantrolene will reverse the hypermetabolic crisis within a few minutes.

After the dantrolene is administered and the acute crisis has subsided, supportive care and correction must be continued. Hyperkalemia should be corrected, and the patient should receive intensive care monitoring for hemodynamic and ventilatory monitoring. Since recrudescence occurs in up to 25% of patients at a mean of 13 hours after the first acute episode, maintenance doses of dantrolene should be continued for 24 to 48 hours after the last observed sign.

An understanding of malignant hyperthermia, as well as the ability to recognize the onset of symptoms and utilize the protocol used to treat it, is essential knowledge for surgeons who wish to be prepared for any event in their operating room. With the current malignant hyperthermia protocol in place, the mortality has decrease from more than 80% in the 1970s to about 5% today.

Amanda R. Kirzner, DO, MPH, is a surgery resident at Montefiore Medical Center in New York City. She can be reached via PSPeditor@allied360.com.

Original citation for this article: Kirzner, A. How to save a life: malignant hyperthermia can be fatal unless caught early, Plastic Surgery Practice. 2014; February: 24-26 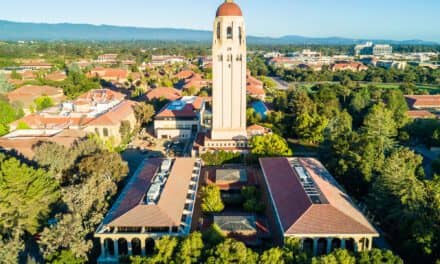 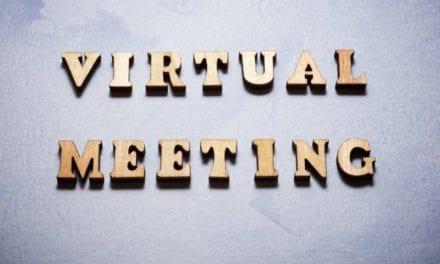 ASPS-Hosted ‘Plastic Surgery The Meeting’ is Going Virtual This Year 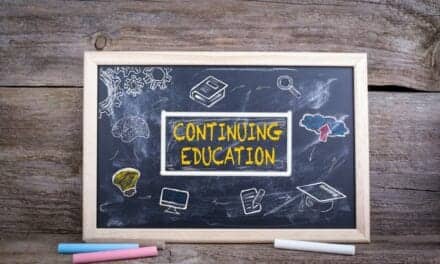