Well-known health care pundit David Phillips expresses his satisfaction with Johnson & Johnson's recently launched Stelara for the treatment of adult patients with moderate to severe plaque psoriasis. He notes that the new prodct is a "first-in-class interleukin (IL) inhibitor" and a "novel and less cumbersome injectable than established biologics for psoriasis, the tumor necrosis factor-alpha inhibitors."

Although the article careens immediatley into a fulsome analysis of how this product may do well in the marketplace, there is something to take away from his perspective on Stelara's medical aspects, and its implications for the cosmetic surgery field. Why J&J's Stelara Launch Should Target Dermatologists First:

An overactive immune system can also trigger high levels of IL-12 and IL-23, two proteins found in the red scaly skin patches characteristic of psoriatic plaques. Stelara (ustekinumab) is a novel monoclonal antibody that binds to IL-12 and IL-23, thereby slowing the overproduction of skin cells and the resultant inflammation (see image to left; click for a larger version).

The actual size of the psoriasis market is deceptive in terms of market size and sales potential. Epidemiological studies have shown that as patients age their risk of developing co-morbid autoimmune diseases, such as the GI disease Crohn’s, rheumatoid arthritis, and psoriatic arthritis, increases, too.

Overlapping pathogenic pathways in autoimmune diseases have not been lost on the makers of the three major TNF-alpha blockers. Amgen, Abbott Labs, and J&J understand the dynamics of brand positioning. With diversified FDA-approved product labeling — from the relatively uncommon spinal arthritic condition, called ankylosing spondylitis, to the more familiar psoriasis, psoriatic or rheumatoid arthritis — the drug makers have successfully sold specialists (in particular, gastroenterologists and rheumatologists) on the clinical utility of prescribing TNF inhibitors across a range of prominent autoimmune diseases…

Philips cuts to the chase further down in the story, in which he writes, "Stelara, like all existing autoimmune-modifying biologics on the market, can increase the risk of opportunistic infections in those patients hosting latent viruses or bacterium."

He also notes pricing and marketing concerns. For example, the average wholesale price of Stelara is $5,595.60 per 45mg/0.5 ml vial, according to CVS Caremark" — a competitive price, says Phillips. 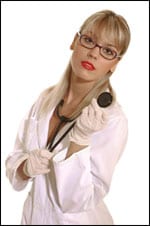 Let's Keep Bo Derek Out of This

Let’s Talk: What’s Conversational Marketing, and Why You Should Care