Kimchi-Based Preservative in Cosmetics May Not Be So Natural 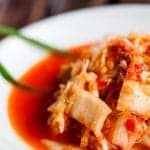 A kimchi-based preservative used in cosmetics may not be so natural after all, new research shows.

Consumer concern about the safety of synthetic preservatives such as parabens has sired a push for natural alternatives. One such alternative is derived from kimchi, a popular Korean staple made out of fermented cabbage and radish.

But scientists are now reporting that at least one commercial kimchi-based preservative marketed as “all-natural” contains synthetic ingredients.

Their findings appear in the ACS’ Journal of Agricultural and Food Chemistry.

The bacteria responsible for kimchi fermentation can produce some compounds that could block the growth of unwanted microbes in cosmetics. Taking advantage of this antimicrobial trait, some cosmetics companies have replaced synthetically produced preservatives with kimchi fermentation products. They claim that these products can combat a wide variety of microorganisms, including yeasts and molds.

The study authors wanted to take a closer look at kimchi-derived commercial products. They found that certain commercial samples of kimchi fermentation products did block the growth of a wide variety of microbes, but further testing showed that they contained compounds that were most likely produced synthetically—namely, didecyldimethylammonium salts and salicylic acid. Their analysis also showed that it was these synthetic additives that were responsible for the antimicrobial activity of the product, not the kimchi.