Implants For The Lower Face

No one can argue that aesthetic facial surgery has made leaps and bounds in treatment philosophies, biomaterials, and technologies in recent years. One significant goal that has emerged is the desire to make patients look younger, not just tighter. A skeletonized appearance resulting from the lack of volume restoration was common several decades ago, but the highly educated public is on to this look and wants to avoid it at all costs.

Today’s patients are sophisticated—largely because information is so readily available on the Internet—and are increasingly demanding. They seek out surgeons who will provide natural-looking rejuvenation. The goal is no longer just to look “younger”; rather, it is more focused on looking as young as one can, considering his or her age. Nothing complements this desired natural result more that adding volume to the face; and nothing is easier, more predictable, and longer lasting than facial implants.

It is surprising how many renowned surgeons perform meticulous upper and lower facial rejuvenation but pay little attention to the midface and mandibular regions. Many techniques for increasing facial volume are available to the aesthetic surgeon, including alloplastic implants, fat injections, facial fillers, osteotomy procedures, and lifting techniques (see the bibliography at the end of this article). In this article, I will deal specifically with alloplastic lower facial implants.

When I first began using facial implants 25 years ago, my choices were limited. Although some prefabricated implants were available, many surgeons made their own by carving blocks of silicone rubber, rolling up polyester fiber mesh, or using other available alloplastic materials.

The Right Shape
The appearance of prefabricated implants significantly increased the treatment options, provided a more natural look, and simplified their placement. Some newer materials—such as expanded polytetrafluoroethylene (ePTFE)—were significant improvements, but others proved problematic. The introduction of “anatomical” implants added the benefit of 3D volume and more harmonious positioning. Finally, CAD/CAM computer technology added the benefit of precise customization for aesthetic and reconstructive indications.

Now more than ever, the array of implant shapes, sizes, and materials provides the surgeon with a host of treatment options. I place midface or chin implants—or both—in the vast majority of my facelift patients, and I believe that this is one of the most overlooked options available to surgeons and patients. Using submalar, malar-shell, and combination implants in the midface can address 99% of volumetric concerns in this area.

The appreciation of profile enhancement and volume enhancement in the lower face is similarly often overlooked. Mandibular hypoplasia, microgenia, and mandibular retrognathia are present in a large segment of the population. True mandibular horizontal deficiency (sometimes coupled with vertical deficiency) can “rob” the patient of a normalized lower face.

Small changes in the chin can lead to significant aesthetic results. This is especially true in patients with low-setting hyoid anatomy in which the hyoid position is inferior and anterior, creating an oblique—and unaesthetic—cervicomental angle. In these patients, even with anterior cervical laxity, pulling the skin back with a facelift does not produce optimum results.

By simply adding a chin implant, the horizontal mandibular length is changed to increase the distance from the chin tip (menton) to the hyoid and the appearance of the cervicomental angle is normalized. Performing a rhytidectomy without the chin implant on the same patient would lead to an aesthetically compromised result.

Many surgeons advocate significant mandibular body and angle implants along with chin implants, and in essence they are increasing the mandibular outline for the entire lower face. I believe that this is excessive; many of these patients look “blocky” or square-faced. Some surgeons have gone so far as to say that this is the new contemporary face of aesthetic surgery.

In my experience, less is sometimes more, and patients still appreciate gentle curves. Obviously, beauty is in the eye of the beholder, so whatever makes patients happy and helps the business grow is appropriate. The use of mandibular-angle implants can be a viable option for patients who lack curvature and volume in the masseteric, ramus, and mandibular angle regions. Some patients have mandibular borders that disappear posteriorly, and enhancing this region can provide significant benefit.

Implant Choice
Many alloplastic implant choices exist; their pros and cons are beyond the scope of this article. One precaution is that no implant should be placed that is difficult to remove. One of the powerful selling points for facial implants is that the procedure to place them is reversible, and they can be removed or adjusted should the patient desire to do so.

Any surgeon who has removed implants that encourage maximum tissue ingrowth can attest to the difficulty and sometimes destruction that accompanies their removal. I prefer silicone or ePTFE implants for the face, but certainly many other options are available and have been successful.

Diagnostic Pitfalls
One of the most common diagnostic problems encountered with chin implants is the correction of a horizontal deficiency in patients who need vertical lengthening as well. Not all of these patients are candidates for implant placement alone. Figure 1 shows a poor aesthetic result that can occur from increasing horizontal length without addressing vertical lengthening. A very unnatural mentolabial fold is produced that trades one deformity for another.

Although some anatomical implants are designed to increase height, they fall short in many cases, in my experience. When significant vertical lengthening is required, the patient is best served by a sliding genioplasty. The inferior mandibular border is advanced, but it is also distracted and held in place with bone plates and sometimes filler grafts; this is illustrated in Figure 2. Figure 3 shows a postoperative result of vertical and horizontal lengthening.

Chin-Implant Techniques
Chin implantation can be performed from a submental or intraoral approach. Either is acceptable, and I have not noticed increased infection from techniques using the intraoral approach. It is somewhat amusing that some surgeons rebuke intraoral placement of a chin implant but have no problem placing midface implants intraorally.

Using an intraoral approach eliminates submental scars, but it is more disruptive to the mentalis musculature. It is imperative to pay close attention to approximating the mentalis muscles with sutures to avoid lip incompetence with this approach.

The submental approach involves a small incision just inferior to the submental crease adjacent to the periosteum. Both approaches require subperiosteal dissection to the first or second molar areas of the mandible. Regardless of the specific approach, the mental nerves are vulnerable and must be protected. Using a 5- to 7-mm periosteal elevator and keeping the edge of the instrument at the inferior border of the mandible will almost always be inferior to the mental foramen. This technique is shown in Figure 4.

I almost always perform submental liposuction with chin implants. Most patients can benefit from liporecontouring of this area, and I believe it helps the tissue drape over the implant as well.

Once the appropriate implant is placed, it is imperative to ensure that the implant tails are lying passively and not folded over or lying below the inferior border of the mandible. Some patients benefit from long, tapered implant-tail extensions, whereas others do not benefit from the extended augmentation. Even anatomical implants often need further trimming to provide customized results. If the tails are trimmed, it is important to provide a significant bevel for a smooth implant-to-bone interface. Otherwise, the patient will notice a bothersome, palpable defect.

Fixation
Chin implants can cause bony resorption of the anterior mandible. I have removed implants placed by other surgeons with significant osteolysis that is generally associated with a mobile implant. This is especially true if the implant lies over the thin alveolar bone and can erode into the tooth roots. All implants should be placed over the dense cortical bone of the menton.

Many surgeons fix chin implants by suturing to the periosteum or deep tissues. I always use a single rigid-fixation screw in the mandibular midline—regardless of submental or intraoral placement—as shown in Figure 5 (page 32). The orthopedic literature is replete with osteolytic processes secondary to mobile hardware. My clinical experience has shown that this fixation leads to faster healing, less pain, and more predictable implant placement.

Mandibular-Angle Implants
As stated earlier, mandibular-angle implants are very useful for adding volume and contour to the posterior lower face. Various configurations are available, and I prefer the implants with a ledge that “catches” the mandible’s inferior border and posterior ramus.

When placing these implants, a 1.5-cm incision is made over the ascending ramus to the periosteum, and subperiosteal dissection is performed over the entire ramus, up to the coronoid notch. A critical step when using the stepped implants is medial release of the periosteum on the inferior mandibular border and posterior ramus. This is most easily accomplished with a “J-stripper” periosteal elevator (Figure 6).

For mandibular-angle implants that have significant lateral dimension, it is imperative to position the bulge in the correct position, usually approximating the masseteric muscle mass and actual reconstructed mandibular angle. Placing a transcutaneous needle through the desired skin position can help position the implant properly.

Finally, the implants are fixed with a single screw. The screw can be placed obliquely through the mouth or transcutaneously through a tissue trocar or cannula.

Tissue is closed in multiple layers, when possible, in all implant placements. I also use clindamycin antibiotic irrigation in the implant pocket prior to placement and again prior to closing.

Complications
Mental-nerve paresthesia is a common sequela of chin-implant placement, but permanent nerve damage is rare when meticulous surgical technique is performed. Most patients will have some temporary dysfunction of the mimetic muscles, especially with an intraoral approach. The dysfunction returns to normal within several weeks, but the patient must be forewarned.

Asymmetry can be a problem if the implant is not fixed or is mobile. One side of the tail (usually the side opposite the surgeon’s dominant hand) can be tilted up or down and produce a visible or palpable deformity. Infection can occur regardless of approach.

It is a good idea to obtain a panoramic radiograph of the mandible to rule out dental and related pathology. I have seen several implants become infected because of dental cysts or periodontal disease that could have easily been diagnosed via panoramic x-ray.

If an infection is minor, it may be irrigated and debrided while salvaging the implant. However, significant infections are best treated with implant removal, because bone loss and tissue damage can occur in chronic states.

Lower facial augmentation can be the keystone to lower facial rejuvenation. Many patients have lower-facial-third vertical and horizontal deficiencies, and simple implant placement can dramatically improve the aesthetics in this region. Lower facial implants are relatively simple—on one hand, they can be easily removed, and on the other hand, they can provide permanent augmentation.

Joseph Niamtu III, DMD, is a board-certified oral and maxillofacial surgeon in private practice in Richmond, Va. He can be reached at niamtu@niamtu.com. 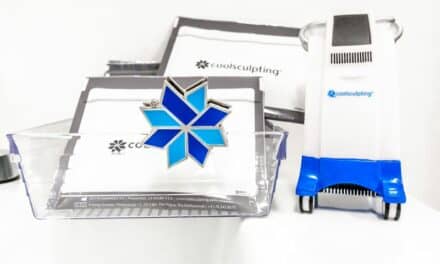 Linda Evangelista Says CoolSculpting ‘Disfigured’ Her. Here’s What Experts Say About the Procedure