The Cosmetic Physicians Society of Australasia is calling for a national ban on teen cosmetic surgery. The proposed ban is a reaction to media reports that a growing number of adolescents and teens in Australia are receiving Botox, breast implants, and the like from their parents as rewards.

In 2009, Queensland introduced laws banning some types of cosmetic surgery on children, including breast and nose surgery, liposuction, and Botox. Doctors who perform such procedures without medical reason can face up to 2 years in prison. The proposed national ban would place all states are in line with Queensland.

Current guidelines in New South Wales require that those under 18 who are considering cosmetic surgery have a 3-month cooling-off period, followed by consultation with an internist and clinical psychologist. 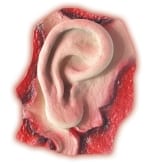 The Long and Short of Earlobe Repair