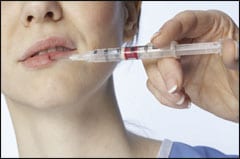 With the aging mouth, several things are happening simultaneously. The key thing is the loss of volume all over the face, especially around the eyes and right around the mouth. Fat is slowly disappearing.

A person might be gaining weight every year, but the face is losing fat. Simultaneously, skin is losing elasticity and getting stretched out, which indicates some true sagging of skin.

The limited options available for rejuvenating the aging mouth area are discussed with David P. Rapaport, MD, FACS, a board-certified plastic surgeon who practices in New York City. He can be reached at www.parkavenueplasticsurgeon.com.

PSP: Once we see signs of aging, what can we do to reverse the process?

Rapaport: When it comes to the earlier decades of a person’s life, say, a woman in her 20s, she obviously by definition doesn’t have aging problems. But there are women in that age group who desire lip enhancement. You will see that as people age, issues relating to volume are what it’s all about. Even in the younger population, there are some people with fuller lips than others. They aren’t rejuvenating their lips, but they’re looking for that fuller look, which really is associated with youth.

That is treated with injections directly into the lips. Today, that would be hyaluronic acid products. My favorite is Restylane in the lips, based on my experience over the years. Juvéderm can be a very good lip filler, as well. I just prefer the thickness of Restylane, which helps me with the control of my volumizing. I also feel that maybe because of its thickness, Restylane seems to have less of a tendency to lose definition or move over time compared with some of the other fillers.

When we look at the border between the pink lip and the white lip, there is a special structure called the white roll. This is the narrow border of the pink lip, which is ideally slightly elevated, and in some people it has its own elastic firmness. It is called the white roll because its structure makes it reflect light. That area is very nice to define with hyaluronic acid. Doing so is greatly appreciated by many patients as a subtle but very effective enhancement.

On the upper lip—more so than the lower lip—you can have vertical lines that develop with time and sometimes from overuse of the lip muscles. Smokers, in particular, get these lines more than others, but they also come with age. Again, the loss of volume and the microscopic loss of fat that’s occurring under the skin of the upper lip will lead to vertical lines. Hyperactivity, though, can [also] occur at younger ages.

Those are key areas in terms of actual aging of the mouth. Those areas lose volume and respond very well to fillers, either hyaluronic acid or other fillers, such as Radiesse. The marionette folds are one of the big complaints of women who come to see me, moving down the path in aging toward the facelift.

In a person’s 20s, you’re just filling [their] lips if they happen to be empty. In their 30s, you might be noticing loss of volume that you’re trying to restore. You’re trying to rejuvenate their lips with fillers, and there might be the beginning of vertical lines. And there can be nasolabial folds that need treatment.

Getting into the 40s and, especially, late 40s, there starts to be more signs of the marionette folds, which respond somewhat to fillers, though not as well as nasolabial folds. People with strong marionette folds often have jowls as a simultaneous problem. That’s where a facelift becomes one of the things to do instead of just fillers, if you want to get all of the improvement you can.

In terms of emptiness or lines around the lip or marionette folds, if the patient is not ready for surgery there’s almost no way out of fillers for the aging mouth.

PSP: What about so-called permanent fillers?

Rapaport: They are not a good option. The face is constantly changing. It’s always losing fat. So if you put in something permanent, it will look good today and bad tomorrow. Years from now, when the fat around the permanent filler diminishes, the thing that was invisible suddenly become visible and it’s nearly impossible to remove silicone-related lumps without major surgery and scarring.

Besides fillers, very tiny doses of Botox can do very well in the upper lip. It can relax a hyperactive lip and give a much better look. Sometimes when you look at a person when he or she is talking, you’ll notice the upper lip will contract a lot more than other people’s, and that’s not always flattering. Botox is good for that. The key is to use very small doses.

PSP: What else should be considered?

What happens with aging is that the distinction between the neck and the face gets more fuzzy thanks to loose skin and jowls, so by defining the chin and strengthening it we can actually create a more youthful appearance.

A lot of people who can benefit from a facelift just aren’t ready for it psychologically or financially.

The hyaluronic acid products help a lot. When you have jowls, there is an area in front of the jowl with a dip.

What you really should do is lift up that jowl like you do every morning in the mirror, but that is an imitation of a facelift. Instead, you can inject hyaluronic acid very artistically. You need a good eye; you need to know what you’re doing, and fill or bridge the space between the jowls and the chin in front. It literally is very much like airbrushing a painting.

That’s what you’re doing with these injectables; you’re airbrushing the aging process by softening the contours on the face. It’s actually a lot of fun.

PSP: Are there noninvasive procedures?

Rapaport: Peels are very good for the fine lines. Peels can go up in strength. Photofacials are good for the skin to help maintain the skin. The patient should be a nonsmoker. That is very, very important.

When it comes to skin texture, that’s when you’re dealing with more things like Fraxel or other laser-type products to smooth out fine lines or improve irregular pigmentation.

There are some plastic surgeons [who] use the phenol peel. Not a whole lot of people do it, but it can be very effective, though there can be some very serious complications.

I don’t do phenol peels; it’s a real art. You have to do it a lot to do it well, or you shouldn’t do it at all.

In general, the way to look at peels, microdermabrasion, and lasers is as a range of interventions that can benefit fine lines, pigmentation, and skin texture.

Procedures that involve little or no downtime tend to also have a more temporary effect; but gentle peels or microdermabrasion can be very pleasing, short-term.

Probably the biggest recent advance when it comes to lasers is the idea of fractionated treatments.

This means that the laser is only working on a certain percentage of the skin, much like a grid. The remainder of the skin is untouched, and therefore the overall healing and downtime are reduced. n

Amy Di Leo is a contributing writer for PSP. She can be reached at .

Allergan To Test Botox For Depression Despite Mixed Results