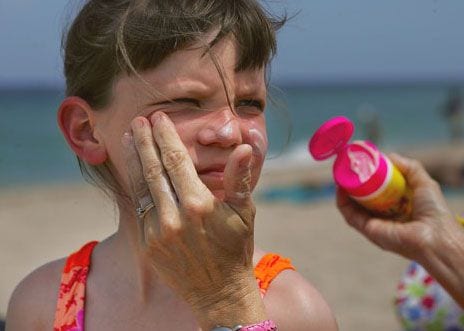 Risk for melanoma in adulthood can be dramatically reduced by the consistent use of sunscreen in infancy and childhood, according to research out of the Texas Biomedical Research Institute in San Antonio.

The new findings appear in the journal Pigment Cell and Melanoma.

The application of lotion containing sunscreen to infant opossum animal model led to a 10-fold reduction in pre-melanotic lesions when compared to infant opossums receiving lotion that did not contain sunscreen. This difference in the development of lesions occurred even when low doses of UV light were applied – so low that they caused no sunburn or even reddening of the skin in the opossums that did not receive sunscreen, the researchers report.

The pre-melanotic lesions did not appear until the infants had become adolescents. Prior experiments established that the pre-melanocytic lesions in opossums do not progress to melanomas until the animals are well into adulthood, as typically occurs in humans.

“Based on these results, we speculate that the reason it is particularly important that sunscreens be used consistently in childhood, and especially in infancy, is because skin cells during growth are dividing much more rapidly than in adulthood, and it is during cell division that the cells are most susceptible to UV-induced damage,” says lead study author John L. VandeBerg, Ph.D, the chief scientific officer at the Texas Biomedical Research Institute, in a news release.

“Evidence that supports this hypothesis is that melanoma is not induced in adult opossums when their shaved skin is irradiated by UV light in the absence of sunscreen.”

Looking Out for the Patient

Sharon Osbourne On Plastic Surgery: ‘I’ve Got My Third Face’