Researchers at the Johns Hopkins University School of Medicine in Baltimore have found that a surgical technique known as temporalis tendon transfer (TTT) may help reanimate the features of patients with facial paralysis, according to a report in the July/August issue of Archives of Facial Plastic Surgery.

Patrick J Byrne, MD, and coworkers studied the progress of seven facial paralysis patients treated with TTT. The technique involves an incision beginning at the ear and ending 3 to 4 cm into the hairline at the temple. The temporalis muscle, a fan-shaped muscle on the side of the head, is cut at the point that it connects to the jawbone and released from the tissue surrounding it. Then it is stretched to the point where the muscles of the mouth join together. The tendon that previously connected the temporalis muscle to the jawbone is cut free and then stretched horizontally for 3 to 4 cm; it is sutured to the surrounding muscles and deep skin tissue.

Before the surgery, physical therapy to retrain facial muscles begins and continues for about 7 days after the procedure.

Four months after the surgery, researchers found patient satisfaction to be “very high.” 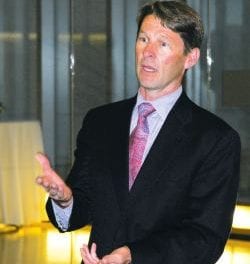