According to a study that appeared in the May/June edition of the American Journal of Health Promotion, advertisements with essential sun-protection messages are reaching far too few men, outdoor enthusiasts, and travelers. Also, none of these ads include information about safe sunscreen use.

Alan Geller, a research associate professor with the Boston University School of Medicine, reviewed 24 popular US magazines, spanning 579 issues published between May and September from 1997 to 2002. He found that 77% of the 783 sun-protection advertisements appeared in women’s magazines—about four per issue, on average—versus less than one ad per issue in parent and family magazines, and less than one in every six issues in outdoor-recreation magazines.

Geller and his associates also discovered that none of the ads included the recommended, complete information on safe sunscreen use per guidelines issued by the International Agency for Research on Cancer: a sun-protection factor of 15, defense against both UVA and UVB rays, reapplication instructions, and adequate coverage.

“We know that men know much less about sun protection than women,” Geller said. “Research has shown us that many, many people use sun-protection products and still get burned.”

To lessen the incidence of burns, skin-care advertising is a good way to better educate a broader audience about how to use sunscreen properly, according to Geller. Therefore, Geller explained, it is in the sunscreen manufacturers’ best interests to ensure that their customers are getting the information they need to obtain the best results from their products. 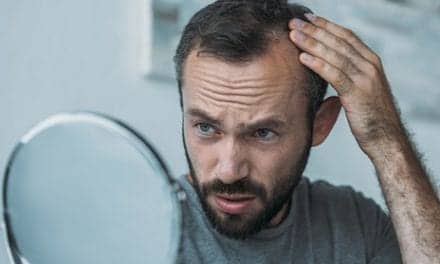 Contraceptives May Help or Hinder Acne

The Biggest Anti-Aging Secret on Earth? Moving Your Body

Interactive Inflammatory Proteins May Cause Rosacea