Prosthetic silicone gel implants have been around since the 1960s. In the 50+ years of their existence, much technology and science has been applied to enhance their safety and aesthetics. Interestingly, during the same time frame, the common practice for delivering a prefilled implant has not changed, with surgeons manually manipulating the implants with their fingers.

The Keller Funnel™, an FDA Class 1 device approved in 2009, introduced plastic surgeons to a new technique for inserting silicone implants in augmentation or reconstruction procedures. Developed by plastic surgeon Kevin Keller, MD (who was not experienced using prefilled gels prior to their reintroduction in 2006), the device was designed to simplify the delivery of the implant into the breast pocket, reduce incision lengths to equal that of saline implant procedures, and to offer a minimal “no-touch” technique to lessen the introduction of contaminants.

As an Emory University research fellow entering into private practice this year, I was particularly interested in the Funnel and how it may reduce overt infection and the formation of biofilm on the implant. Could this device ultimately help reduce or prevent the incidence of capsular contracture?

According to multiple studies and clinical papers, capsular contracture is the leading cause for revision breast surgery. In principle, patients are counseled that one in six women will require reoperation in the first year alone due to complications. Core studies by implant manufacturers cite that capsular contracture occurs in 10% to 15% of all women who undergo breast augmentation procedures and is the most common reason requiring reoperation. Capsular contracture remains the single most vexing complication for patients and surgeons. Multiple factors likely cause contracture with infection being a significant contributor.

PUTTING THE FUNNEL TO THE TEST

The idea of the test was to compare the traditional digital insertion method to the Funnel’s “no touch” technique in terms of bacterial transfer on the implant shell. To test the Keller Funnel™, two freshly embalmed cadavers were used, with 5-cm incisions placed in the inframammary fold. A second, large incision was made at the clavicle to allow for removal of the implant without loss of surface coated dye. Smooth, round, silicone-gel implants (Mentor Corporation, Santa Barbara, Calif) were used, ranging in size between 300 cubic centimeters (cc) and 600 cc, in both the digital insertion and Funnel procedures.

A fluoroscein paste was created and applied to a large region of skin surrounding the incision of the cadaver specimen. After each of the 24 implantations for both insertion methods, the implants were soaked in sterile water for 5 minutes. Five milliliters of the aspirated solution containing the leached flouroscein dye from the implant surface was then analyzed to detect fluorescent emissions using a spectrophotometer.

To test the potential transfer of bacteria during implantation, a mixture of methicillin-sensitive Staphylococcus aureus was mixed with sterile water, and using a sterile tissue swab, applied to the breast parenchyma within the inframammary incision. The implants were then inserted through the (inoculated, compromised, artificially contaminated) incision. Once the implant was removed, culture swabs were taken and sent to an independent lab. 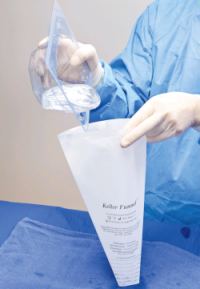 The spectrophotometer detected emissions from all explanted implants regardless of the technique. However, the implants inserted with the Keller Funnel™ showed so little emission that the length of time of detection had to be increased. On average, there was a 27-fold decrease in skin contact with the implants inserted with the Funnel compared to the digital insertion method. Notably, when using the Funnel, we found the smaller the implant the less chance of contact, with the 300-cc implants experiencing a 128-fold reduction compared to a 15-fold reduction on the 600-cc implant.

On the bacterial transfer test, contamination from breast parenchyma was two times more likely using the standard digital insertion technique. We found no correlation noted for either technique in regard to the size of the implant and the amount of bacterial transfer.

CONTEXTUAL UNDERSTANDING OF THE RESULTS

The breast is not a sterile organ. Cited by Pittet et al in a 2005 Lancet article on infections in breast implants, the terminal ducts at the nipple and areola are colonized with endogenous flora, most often coagulase negative Staphylococcus species. These ducts run deep into the breast tissue, and, if violated, can lead to contamination. More importantly, a patient’s skin may not be sterile at the time of implantation. Surgical preparation of the patient at the beginning of the operation does not guarantee a sterile field. The most common bacteria cultured after surgical prep are coagulase negative Staphylococcus and Propionibacterium1 which, by no coincidence, are also the most common bacteria cultured from contracted capsules.2

Approximately two-thirds of infections present in the postoperative period are likely due to a break in surgical technique or poor skin preparation.3 Late infections can occur months to years after surgery and are caused by secondary bacteremia from a distant infection or declaration of a subclinical infection from the initial surgery. Recent investigations into biofilms places further importance into sterility at the initial surgery to prevent even late complications. Cultures taken of contracted capsules years after surgery most often grow staph epidermidis, a known skin contaminant.4

Technical Points When Using the Funnel

Management of these infected implants is controversial. A review of historical FDA reported data shows that 56.6% of infected breast implants were removed.5 More recent reports discuss management with intravenous antibiotics, local wound care, and/or operative debridement with implant salvage.6 No matter the treatment strategy, breast implant infections are a significant burden to the patient and the health care system.

To minimize infections, some newer practices employed by surgeons include placing Tegaderm (3M, St Paul) over the nipple areolar complexes, placing Ioban (3M, St Paul) over the entire surgical field, irrigating vigorously with antibiotic solution, and changing gloves prior to implantation. Despite these best efforts, infection and contracture continue to cause significant morbidity after implantation.

A true “No Touch” technique would allow for placing a breast implant directly into the breast pocket without ever touching instruments, drapes, gloves, or the patient’s skin and parenchyma. Even after meticulous surgical preparation, the skin and surgical field can remain contaminated. Thus, placing Ioban or changing surgical gloves or reprepping with a product that cannot completely rid the skin of bacteria is of little utility. The Keller Funnel™ marketing materials state that the device offers surgeons a true “No Touch” technique in implant placement. The data from this study supports a “Minimal Touch” technique.

Although plastic surgeons are able to deliver aesthetically sound breast augmentations using the tried-and-true finger-insertion method, the findings my colleagues and I uncovered lead me to the conclusion that the Keller Funnel™ can significantly reduce the amount of skin contact and potential parenchyma contamination during breast implantation.

Hunter R. Moyer, MD, is a senior fellow at Emory University in Atlanta and a member of Atlanta Plastic Surgery. He can be reached at plasticsurgery@allied360.com.

Funding/Support: Keller Medical provided an unrestricted grant to Emory University to cover lab fees and the cost of the cadaver.