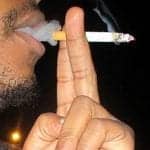 “Despite the evidence that cigarette smoking negatively impacts wound healing on multiple levels, it’s just not something that is typically mentioned in a patient visit,” writes study author Jodi McDaniel, PhD, CNP, of The Ohio State University College of Nursing in Columbus. The findings appear in the Journal of Wound Ostomy Continence Nursing. “While evidence-based guidelines for both chronic wound care and smoking cessation exist, they aren’t being implemented together.”

“The deep skin wrinkling associated with chronic smoking is caused by chemicals that impact the production of collagen,” says McDaniel. “Chemicals like carbon monoxide also reduce blood flow to the wound and prevent skin’s natural anti-inflammatory and anti-bacterial mechanisms—so it’s a perfect chemical storm that makes wounds more likely to get infected, and less likely to heal.”

It takes just one cigarette to reduce blood and oxygen flow to tissues; and a pack-a-day habit results in significant and prolonged oxygen deprivation to tissues, she says.

While nicotine is one of the chemicals in cigarettes that has been connected with reduced blood flow, McDaniel is quick to point out that studies looking at the use of nicotine replacement drugs, used by millions to help kick the habit, don’t appear to have the same impact on tissue as when the chemical is inhaled through smoke.

Quitting smoking is not easy. Existing evidence suggests that smokers are more successful with abstinence when presented with repeated personalized messages urging them to quit along with assistance in their attempts to quit smoking. “We see these chronic wound patients are suffering, and we hope that clinicians can help start a dialogue that will emphasize the importance of tobacco cessation and potentially improve healing outcomes,” McDaniel writes in a news release.

Cosmetic surgeons often have these difficult conversations with their patients before they schedule any procedures. “Patients are asked during the initial consultation and again before surgery about their tobacco use,” says Timothy R. Miller, MD, a facial plastic surgeon in Aliso Viejo, Calif. “Ideally, patients should stop at least 4 weeks prior to surgery. Many surgeons believe at 4 weeks some of the deleterious effects of smoking will be significantly decreased, although longer is better.”

Miller may make some modifications to the procedure based on smoking status and other factors, including skin quality and health status. “With respect to facelifts, that would mean less skin undermining, but this can be reduced simultaneously by using deep plane techniques, which commonly have less skin undermining. I would also lessen the intensity of laser settings too,” he tells PSP.

Despite all of the negative health consequences associated with smoking, many patients who see cosmetic surgeon Joe Niamtu III, DMD, still smoke. “Tobacco is engrained in this culture in economy, politics, and business—from Jamestown to present,” Niamtu says of Richmond, Va, where he practices.

Niamtu is currently conducting a study on complications on facelift patients who smoke. “Empirically, I don’t see significant differences in healing with moderate smokers (one pack per day) and non-smokers,” he says.

Generally speaking, he adds, “smokers do have increased incidence of post auricular facelift flap breakdown, but I have not seen an increase in the preauricular flap, which would be more problematic,” he says. “I am more conservative with facelifts on smokers but don’t demand they stop. I recommend they quit before surgery, but most won’t.”

Smoking also complicates anesthesia, he adds. “We also have special smoker’s consents that outlay the facts about smoking and health, healing, and anesthesia,” he says. “If someone is an extreme smoker (two to four packs a day) and has respiratory problems, I refuse surgery.”

Tummy tucks, facelifts, and breast reductions or mastopexies are procedures where large skin flaps are more susceptible to the effects of smoking, adds Mark Mofid, MD, FACS, a board-certified plastic surgeon in La Jolla, Calif. “For those patients, I like them to be off of cigarettes for 3 months and an additional 2 months after surgery,” he tells PSP.

Other procedures like breast augmentation, liposuction, and things like endoscopic browlifts and closed-technique rhinoplasty don’t result in skin flaps that are susceptible to necrosis, Mofid says. “I ask them to be off of cigarettes for only 2 weeks before and 2 weeks after surgery,” he says. “I also don’t permit them to be around secondhand smoke. If there is a smoker in the house, he or she must smoke outside.”

Most patients who have large flap surgeries decide that they may as well quit for good after being off of cigarettes for a full 5 months, he says.

“I’ve only had two patients in the last 10 years that didn’t follow the strict guidelines. Both smoked in the days before and after surgery. Both had breast reductions, and both wound up with unilateral breast wounds that took months to heal and required secondary revisionary procedures to cut out the scar tissue and more tissue on the other breast to match the new smaller size,” he recalls. “It’s a big deal. Oftentimes, patients don’t realize that.”

Springtime in Phoenix: the 2010 ASLMS Redux