The Buttocks After Weight Loss

The remarkable health benefits that accrue from massive weight loss after bariatric surgery are well established in the surgical literature. As a result, the procedure is being performed more frequently than ever. However, a massive pannus and redundant skin and soft tissue in many areas of the body—including the hips, thighs, arms, back, and gluteal region—often remain following massive weight loss. These areas of excess tissue can cause considerable morbidity for the bariatric-surgery patient.

In addition to the obvious aesthetic benefits that result after this tissue is resected, relief from chronic intertriginous infections and improvements in mobility and ability to perform daily functions can be expected when these real deformities are addressed by the plastic surgeon.

One body area that has received little attention following massive weight loss is the gluteal region. Using de-epithelialized adipocutaneous flaps from the lumbar region in an area that is typically excised during belt-lipectomy body-lift surgery, surgeons can achieve improved gluteal projection and contour. This procedure is particularly well suited for the redundant lower-back skin commonly seen in the postbariatric surgical patient (Figure 1).1

The technique described here exploits the excess tissue in the lower back for gluteal augmentation with bilateral, de-epithelialized, paddle-shaped dermal-fat flaps based on a medial vascular pedicle. No new scars result in patients who have already undergone a belt lipectomy, and well-shaped buttocks can be reliably achieved with low complication rates.

Surgical Plan and Markings
Bilateral, inferiorly rotated, de-epithelialized, adipocutaneous flaps based on perforators of the superior gluteal artery are used for the augmentation. Preoperative markings are performed with the patient in a standing position and are based upon two anatomic landmarks: the coccyx and the anterosuperior iliac spine. A mark is made in the posterior midline 4 cm superior to the coccyx and is extended laterally in a line toward each anterosuperior iliac spine, finishing anteriorly in line with the location an abdominoplasty scar would occupy.

The flaps are then rotated into the pockets. The flaps’ vascular pedicles consist of the cutaneous perforators of the superior gluteal artery (Figure 4). After careful hemostasis is obtained, the viability of the dermal-fat flaps is tested. The two edges of the flaps are rotated and sutured together in the muscle-fascia plane. The thick dermal-fat flap covering the rotation flap is advanced in the cephalic direction and closed in layers, using the superficial fascial system for strength.2

Satisfactory Results
The 30 patients in this series were quite satisfied with the postoperative contour improvements in the gluteal region following gluteal autologous fat augmentation in combination with a belt lipectomy. A widened scar occurred in a few areas in the posterior incision that was likely due to excess tension on the closure line. In addition, we observed a seroma that was successfully treated with a long-term drain (10 days). There were no incidences of flap loss or infection.

As gluteoplasty evolves, the aesthetic surgeon will no doubt face new challenges requiring the refinement of current approaches. The rotation-flap gluteal augmentation represents an additional option for gluteoplasty, particularly in the ever-growing postbariatric patient population. PSP

Cassio Eduardo Raposo-Amaral, MD, is on the faculty of the Department of Plastic Surgery, Medical Sciences School, State University of Campinas, São Paulo, Brazil. He can be reached at cassioraposo@hotmail.com 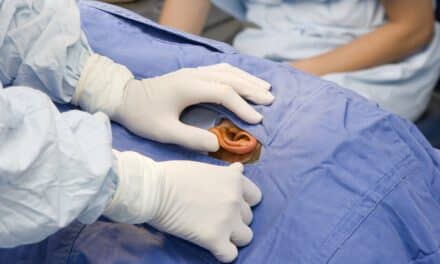